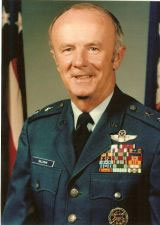 Maj. Gen. Halloran is one of Minnesota’s most distinguished aviators.

Beginnings. “Pat” Halloran was born and raised in Chatfield, Minnesota. After graduating from Chatfield High School in 1946, he attended the MacPhail Conservatory of Music in Minneapolis for a few years before enlisting in the Air Force in 1949.

Early years as a pilot. When he joined the Air Force Halloran became an Aviation Cadet. He received his wings and officer’s commission in September of 1950, graduating at Williams Air Force Base, AZ. He spent his first seven years flying F-84 jet fighters from bases in Georgia, Maine, Oklahoma, England, Alaska, Puerto Rico and Japan. He also flew 100 combat missions in the F-84 over North Korea in 1952.

Reconnaissance. In 1956 he was selected for the first group of pilots to fly the new, secret U-2 high altitude reconnaissance aircraft for the Air Force. The U-2 flew at altitudes of over 70,000 feet and carried enough fuel for ten hours of flight. In 1965, he became one of the first pilots to fly the new, long-range, Mach 3 SR-71 “Blackbird,” an aircraft he then flew for almost eight years. The SR-71 was the fastest, highest flying jet aircraft in the world, cruising at over 2000 mph at over 85,000 feet and with a range of over 3,000 miles. The SR-71 could accelerate to outfly surface-to-air missiles. Halloran accumulated nearly 600 hours in the SR-71. He flew missions over Cuba in the U-2 and the SR-71 Blackbird over Vietnam in both the U-2 and the SR-71.

In 1971 he received his Bachelor of Arts degree in social science from Troy State University in Alabama and also completed the Air War College, Maxwell Air Force Base, Alabama, as a distinguished graduate.

Command and Staff. In 1969 Halloran was appointed commander of the 1st Strategic Reconnaissance Squadron, the first of several high-level command and staff assignments that took him to various headquarters, including 3rd Air Division in Guam, 15th Air Force in California, and Strategic Air Command in Nebraska. His final assignment was in the Office of the Joint Chiefs of Staff, in the Pentagon.

Retirement. Halloran retired in 1983 with over 8,000 hours of flying time in the military and 34 years of service. He has over 12,000 hours of total flying time. He was inducted into the Minnesota Aviation Hall of Fame in 2006. He now lives in Colorado Springs and is actively involved in the Experimental Aircraft Association (EAA). 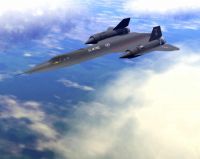