George was born Ingval Ingebretsen on June 7, 1912 in Stavanger, Norway. When he was seventeen, Ingval followed his uncle Lois to America, joining him, his wife Gunda, and their four young children on their farm in Rosefield, North Dakota. By the 1940s, Ingval had learned English and moved to his own home in Laurens, Iowa.

When the U.S. entered World War II, Ingval volunteered to defend his new country. He entered the army in March 1942, joining Company A, 385th Infantry Regiment. During training in Texas, Ingval petitioned for naturalization. On August 25, 1942, he officially became an American citizen, changing his name to George.

Earlier that month, the 99th Infantry Battalion (Separate) was activated at Camp Ripley. Its ranks were a combination of Norwegians and first- and second-generation Norwegian-Americans recruited for a possible Allied invasion of Nazi-occupied Norway. Private Ingebretsen, who grew up in Norway and was fluent in English and Norwegian, was a perfect candidate for the unit. After he joined the 99th in Minnesota, the battalion left for Camp Hale, Colorado, where they underwent intensive training for the wintery, rugged terrain they would encounter in Norway.

The 99th left for Europe in September 1943 and landed in France two weeks after D-Day. They fought across northern France and Belgium and held critical positions against SS Panzer units during the Battle of the Bulge. The 99th then joined with Army Rangers and members of the 1st Special Service Force to form the 474th Infantry Regiment. As part of the regiment, the 99th assisted the famous “Monuments Men,” helping rescue truckloads of gold and priceless artwork from Nazi Germany.

After V-E Day, the 474th was sent to Norway to help disarm the remaining Wehrmacht soldiers and ensure a peaceful transition. The 99th Battalion were welcomed as heroes. They marched in several parades and served as King Haakon VII’s Honor Guard when he returned from exile. Many of the 99th enjoyed a happy reunion with friends and family. Like many of the men, Private Ingebretsen fell in love with Norwegian girl, Signe Borghild, and they were married in September 1945.

The 99th returned to the U.S. that November. Signe followed George to America the next July, and became a citizen two years later. They made their new home in Minneapolis, where he worked as a machinist and she as a bindery worker. Although the two had no children, they remained married for over fifty years until George’s death on April 20, 1997. Signe survived him by twenty years, and passed away on April 4, 2017. They are buried together at Fort Snelling National Cemetery. 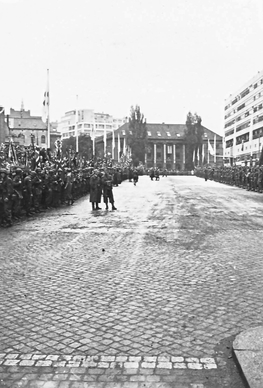