Milburn Henke was born August 24, 1918 to Carl and Louise Henke on a farm in McLeod County. The family moved to Hutchinson in 1921. As a young man, Milburn enjoyed baseball, reading, hunting, and fishing and worked for his father at Henke’s Café. On September 21, 1940, Milburn chose to “beat the draft” and enlist, joining “B” Company, 135th Infantry Regiment of the 34th “Red Bull” Division. After merging into the Iowa National Guard’s “B” Company, 133rd Regiment during training, they left for Europe one month after Pearl Harbor.

The 34th arrived in Belfast, Northern Ireland on January 26, 1942. As the men waited to disembark, a colonel climbed aboard and asked for a man from “B” Company. Lieutenant Springer turned to Henke, the nearest private, and told him to go. Henke followed, thinking he would be unloading cargo until General Russell Hartle met him and asked if he could talk to reporters. “Well, if I have to, I think I can,” Henke replied.

The National Anthem played as Henke descended the gangplank. The crowd roared as he stepped off, the first G.I. to officially set foot in Europe. He had to repeat the step six times so photographers could get the perfect shot. Hartle was surprised to find that the first man ashore was from Minnesota, not his own Iowa as he had planned. Henke soon became a celebrity. A call between Milburn, his parents, and his sweetheart Iola Christensen was broadcast in Britain and the U.S. He appeared in newspapers and magazines and met Queen Elizabeth and Eleanor Roosevelt. “With all the attention I got,” he recalled, “it looked as though the Army’s plan was for me to win the war single-handed.”

At the end of the year, the division left for North Africa where they helped liberate Tunisia from Axis control. During the fighting, Lieutenant Springer was wounded in the leg. Crawling under heavy fire, Sergeant Henke tied a piece of Springer’s coat around the leg and pulled him to safety, saving his life and earning a Silver Star. As the Allies prepared to invade Italy, a jeep Henke was riding in overturned, fracturing his back as it rolled over him. He spent four months in the hospital and shipped home on leave after briefly returning to duty.

Once home, he asked Iola to marry him, and they tied the knot on August 20, 1944. He was discharged after serving one year in Texas and Georgia. The two returned to Hutchinson and raised three children while Milburn worked for his father before opening his own Henke’s Café. He was an active member the American Legion, Veterans of Foreign Wars, and Disabled American Veterans and helped with the Special Olympics.

Milburn Henke insisted there was nothing special about him, but he remained famous in Northern Ireland and was invited back for the 25th and 50th anniversaries of his landing. He died April 26, 1998 and is buried at Peace Cemetery near several men who followed him down the gangplank in 1942. Thinking back to that day, he pointed out, “I was just sort of picked out of a hat. But I never tried to downgrade what it meant: the symbol of America sending its boys to Europe to help win the war.” 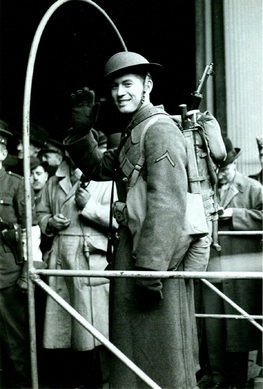 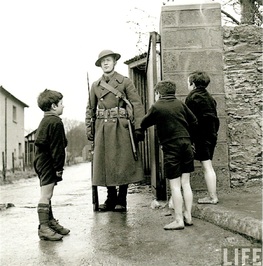 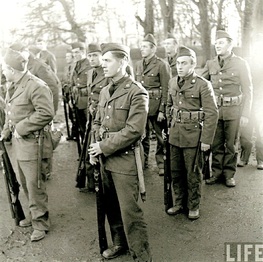