In the Fight: Minnesota and the First World War. The experiences of Minnesota men and women who served and contributed to the "Great War" effort from 1916 to 1918. The exhibit highlights the causes, how the war was waged, and how it fundamentally changed state, national, and world history. Visitors walk through a simulated World War I trench and bunker while viewing static and multimedia exhibits.

Minnesota Voices from the Vietnam War. Minnesota servicemen and women in Southeast Asia during the Vietnam War share their memories and feelings. The exhibit focuses primarily on the ten year period from the start of major US military involvement in 1965 to the fall of Saigon in 1975. It also covers US Allies, early involvement at the end of WWII, and the war's aftermath.

Norwegian-Americans and the 99th Infantry Bn (Sep) during World War Two. Initially organized at Camp Ripley in 1942, this unit trained for ski and mountain warfare, fought in Europe, and aided the transition of German-occupied Norway back to freedom when the war ended in 1945.

Women in the Military. The evolving story of women in the ranks of our nation's Armed Forces. 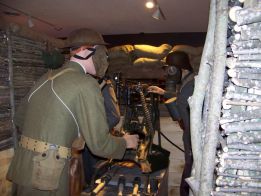 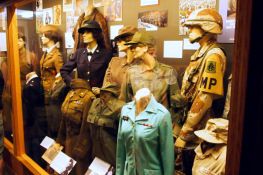 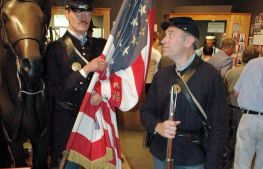