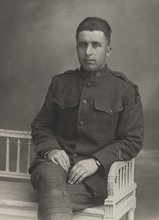 For those who can't be home for the holidays.

This chaplain in Vietnam was known as the "Flying Padre."

The first American GI in Europe during WWII.

This World War II vet served four years as an army dentist in the South Pacific.

From an early age, this Air Force Academy graduate wanted to fly.

This Navy Seebee helped reconstruct the airfield on Guadalcanal during WWII.

Like many servicemen, this young Marine didn't see action.

This soldier joined the National Guard and ended up in the Regular Army during World War I.

During World War II, this paratrooper made four jumps into intense combat zones.

During World War II, this veteran made aircraft parts before joining the Women's Army Corps.

Corporal Vosika fought in the Philippines during the Spanish American War and insurrection that followed.