Earl was born in Superior, Wisconsin on 6 February 1918 to Selma (Dahlberg) and Albert Anderson. He attended high school at Superior Central High School and graduated in 1936. He went on to continue his education and earned a bachelor’s degree from Superior State College, and a master’s degree from the University of Minnesota.

Like many young men at the time, he joined the Army Air Corps in 1941. This would eventually lead him to service in the European Theater of Operations where he would serve on a B-17 with the 398thBomb Group. He flew 32 missions, including his tenth mission on D-Day, 6 June 1944. Arguably his most interesting mission was #19 when his plane limped back to England with 400 holes in it and three engines knocked out. He noted succinctly in his flight diary that they also crash landed on the shore.

He was awarded numerous medals for his wartime service, including the Distinguished Flying Cross and the Air Medal. He ended his Air Force career as a Lieutenant Colonel in the Air Force Reserve in 1967.

He married Lois Gronquist on 14 May 1943, and they went on to have three children and enjoyed many grandchildren. Earl passed away on 28 April 2011 at the age of 93. 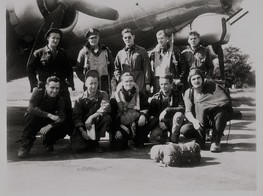