Ted Johnson was born 21 November 1922 and raised in St. Paul.  In 1941, Johnson was working as a 19 year-old farm laborer near Northfield, Minnesota. Europe had been at war since September 1939, and as part of the British Empire, Canada was also at war. The United States was still at peace, but by February 1941 the Minnesota National Guard had been mobilized and the nation was preparing for what seemed to be America’s eventual entry into the war.

Johnson was not in the National Guard but didn’t want to wait to get into the fight.  In June 1941 he drove a man and his wife to Victoria, British Columbia, to visit the man’s hospitalized brother.  On 20 June, while killing time in Victoria, he walked into a recruiting station and enlisted in the Canadian Army. His service records indicate that as an American he was not required to take the standard Canadian citizen’s oath of allegiance to “His Britannic Majesty,” the King of England.

On 2 August 1942 Johnson volunteered for, and was accepted into, the 2nd Canadian Parachute Battalion.  He completed jump training on 9 September 1942, thus qualifying him for $.75 per day in extra pay.  That fall he transferred into the 4th Co, 2nd Regiment, of the 1st Special Service Force (FSSF).  The 1,800 member Force was an elite joint American/Canadian commando unit specially trained in airborne, amphibious, mountain, and winter operations. It was a tough, physically demanding unit to be in, and is the precursor of todays’ Special Operations Forces in both the Canadian and U.S. armies. The FSSF is also known as the Devil’s Brigade and Black Devils—nicknames given to the unit by German forces at Anzio because FSSF men smeared their faces with black boot polish during covert night operations.

Johnson was involved in all the major operations of the FSSF. In August 1943 he participated in amphibious landings in the Aleutian Islands. He returned briefly to the United States when his mother died, but went back to his unit in time to be sent to Italy via North Africa, arriving in November 1943. Soon in combat, the FSSF captured a heavily fortified German position at Mt. Difensa in a daring surprise assault in which Johnson was wounded by a

piece of shrapnel in his chest on 5 December. After recovery and rejoining his unit, Johnson participated in unit operations in Anzio, the liberation of Rome, and the fighting advance into Northern Italy.  On 14 August 1944 he participated in the small boat commando assault on Iles d’ Hyeres, as part of the invasion of Southern France. The unit remained in Southern France and on the Franco-Italian Border until the end of November 1944.

When the FSSF was disbanded on 5 December 1944, Johnson, who was now a sergeant, requested to be transferred to the U.S. Army, but his request was denied so he stayed with the Canadian Army, from which he was discharged on 20 February 1946.

After the war he returned to St. Paul, married, went to work for the Minnesota Transfer Railway (from

which he retired after 34 years), and raised nine children.  He died 10 November 2008 at the age of 85, surrounded by a loving family. 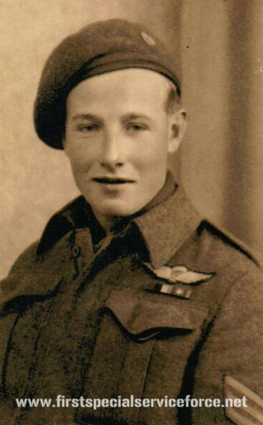 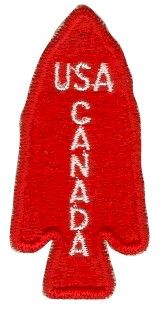